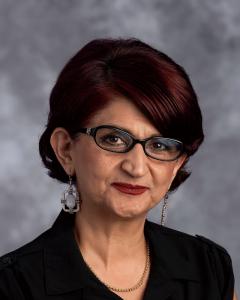 Soussan Bayati is the Cosmetology instructor at the Academy where she helps prepare students for the Virginia State Board Cosmetology License. Mrs. Bayati brings over twenty years experience in the field to the Academy. Born in Tehran, Iran, Mrs. Bayati received her training at the Hairdressing Institute and Vocational Training Center and the School of Art and Hair Design. She owned her own training institute for cosmetology in Tehran, The Gilda Institute, and served as the head administrator there. Mrs. Bayati came to the United States in 1989 and completed her Virginia Cosmetology License in 1994. During this time, she worked as a representative for Sebastian International, where she attended hair shows, seminars, and worked as a hair stylist in various hair salons. Mrs. Bayati joined the Academy in 1997. She received her teaching certification from James Madison University in 1999. She was one of nine representatives who participated in an educator study tour by CDS International for American Educators in Germany in 1999. She was recognized as an Outstanding Vocational Educator by Penn College Of Technology in 2004. She was also a nominee for the State of Virginia Outstanding Cosmetology Instructor. She served as the President of the Fairfax County Cosmetology Council for 2 years. In 2005 Mrs. Bayati was nominated for the Agnes Meyer Teacher of the Year in Fairfax County and the recipient of the Hodgson Award. In 2008, she was the VATIE Teacher of the Year and in 2009 the Cosmetology Program was the first recipient of the Governor’s Exemplary Standard Award.